I CAN HAS JOB? 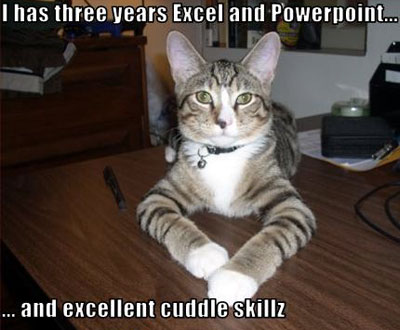 I recently put out a casting call for my next short film and have been constantly amused at what some people consider a good covering letter. This one really made me smile so I had to respond, probably a bit harsh but couldn't resist.

I've read your job posting with interest but I'm not coming just for an audition outside London, where I live (except if you pay for my travel).
I've done already 37 films in the UK, only from April 2010, and for some of them I didn't even need auditions.
I have extensive experience as an actor, which I believe, would be an ideal match for almost any role.
I've got profiles on Total Talent, Bedroom Genius and Facebook.
I work only with filmmakers who are friendly, sincere, reliable and professional, with clear vision, people who know exactly what they want from me.
Last but not least: you need to give me your promise, written on paper, that you'll provide, when finished, a copy of the film on DVD.

I'm glad you read our casting call with interest, unfortunately if you're unwilling to even travel to an audition in Greater London (where you live) without being paid I don't think you're the right person for the role.

It's very impressive that you've acted in 37 films since April 2010, unfortunately I always favour quality over quantity. I once ate 15 packets of crisps in 3 hours but only enjoyed the 5th packet, the rest were rubbish.

It's very helpful that you have extensive experience as an actor, and I agree that it would make you ideal for almost any acting role. To be honest I'm a bit intimidated and only like working with inexperienced actors who I can boss around.

I also have a profile on Facebook but unfortunately we're not friends otherwise I would poke you.

It's wise that you only work with filmmakers who are friendly, sincere, reliable and professional. Unfortunately I don't have a clear vision of what I want, I usually just point the camera at the actors and hope for the best. I can only imagine I would disappoint you as a director.

I'm more than happy to give anyone I work with a signed agreement, on paper, that they will receive a DVD copy of the finished film. However, my DVD player is currently broken and I don't think it's fair that other people could watch my film when I can't.

Thank you for your application but on this occasion I won't be offering you an audition that you're not willing to travel to. Good luck with all your future endeavours.