Last weekend I and many others, over 250 teams, took part in the Sci-Fi-London 48 Hour Film Challenge. Basically the challenge is to make a five minute sci-fi film in 48 hours whilst incorporating three random elements you receive at the start. So around 10am on Saturday morning we all piled into the Apollo cinema in Piccadilly Circus to hear the rules once again and select our three criteria. One by one we shuffled to the front and dipped our hands into three silver sacks to pluck pieces of paper that gave us our film title, dialogue that had to be spoken and a prop that had to be used. Judging by some of the elements I've heard about I think we didn't do too badly. Some people ended up with the dialogue, "Geez! What have you done to my toilet? Looks like the Dulux dog exploded in there." If I'd got that I think I would've just curled into a ball and cried.

Our three criteria were:
Title - The Last Book in The Library
Dialogue - "I guess all you can do is wish them a happy life together."
Prop - A desk lamp with no bulb, we see a character screw in a bulb.

We'd already scouted a few potential locations around West London that we thought would be cool to film and had our actors in place (the great David Chrysanthou and Gabriella Montrose), so all we had to do was come up with a reasonably coherent story that worked with the three random elements then film, edit, grade, do fx work, sound design, and compose music, yeah, that's all we had to do. We quickly came up with the idea of a post-apocalyptic future and a masked character who wanders around looking for things that may be useful to salvage - so far so clichéd. We liked the idea of cutting back and forth between two separate time frames so we decided to use the present day and have two characters meeting and getting to know each other, intercutting that with a seemingly random salvage man in the future - slightly more interesting. Then we somehow tried to piece it all together whilst incorporating the dialogue and prop. Whether we've been successful or not I don't know, to be honest I've lost all perspective on the film. What I do know is the experience itself was really enjoyable and I recommend any filmmakers take part in these kind of challenges. You learn a lot about not only filmmaking and the challenges of shooting, editing, grading, sound designing, but also about yourself and how you cope under pressure and how creative you can be when a crazy deadline is looming. This was my first 48 hour film challenge but I loved having such a tight schedule as it meant everyone pitched in and just got on with trying to make the best film possible. At times it was slightly stressful, (we only had our actress for three hours and the sun was rapidly fading, we got kicked off of a train platform by an overzealous TFL employee and consequently had to find another location very quickly), but more than anything it was fun and now the cast and crew all have a pretty decent short film to show for a weekends work. Not bad I say. We even had time to sit down for a pizza and watch Louis Theroux whilst the footage was transcoding.

I guess it's tempting to go back to the film and tinker with it, reshoot things, expand the story, spend longer on the edit but I like the idea of leaving it as is and having the film as a testament to what we made at that point in time, mistakes, warts and out of focus shots all included.

I'm thinking about making this a regular occurrence and imposing my own 48 hour deadline every couple of months. It's a great way of being creative in such a short space of time and at the end you have a film that didn't exist a mere 48 hours beforehand. I'll definitely be entering again next year for more adventures in two day filmmaking.

Once the shortlist of films has been announced I'll post our film on here for you to watch. Until then here's a collage of some snaps I took throughout the weekend.

*Geeky technical fact: the majority of our film was shot with a second-hand 35mm lens from eBay that cost me £14. Love it!* 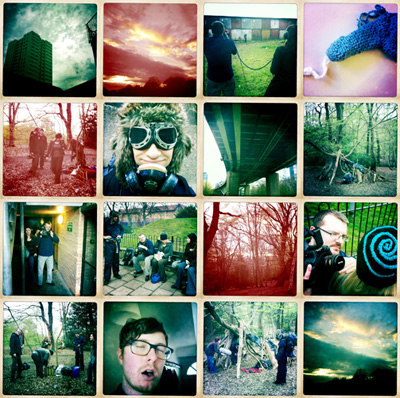