Last week I filmed four hectic but very fun days on Plastic Love. I got some great footage and I'm in the process of editing it right now. I just wanted to share some very short character specific teaser trailers I made for the film. When I say short, I mean blink and you'll miss them, and when I say teaser, I mean they reveal nothing. Consider yourself teased... hopefully.

More information on Plastic Love is available on the Facebook Page.
If you're a Tweeter just search for #Plastic_Love

Made this for a bit of fun.
If you haven't seen it, the film can be watched on the Virgin Media Shorts website. 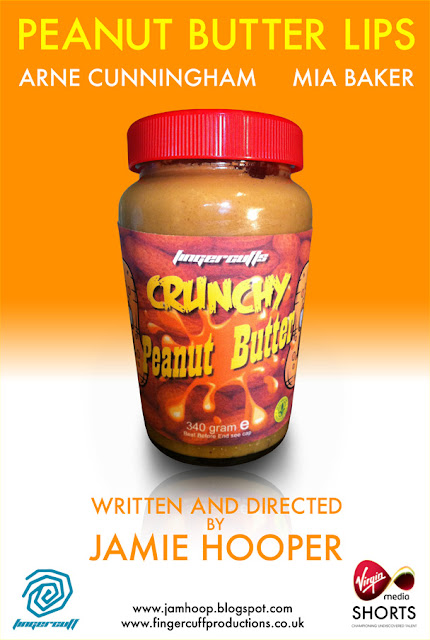 So this is my first blog post in an age, in web-time I think my last one was sometime in the cretaceous period. Luckily my blog hasn't fossilised just yet. This one is all about my latest short film that I made for Virgin Media Shorts, a yearly competition and probably the biggest of it's kind in the country. The rules are simple, make a film that's U/PG rated and no longer than 2 minutes 20 seconds. That's it! I knew I wanted to enter this year so I put my thinking cap on. Unfortunately the batteries in my thinking cap had died so I was forced to use what dwindling grey matter I have left.

After Side by Side I was keen to work with the wonderful Mia Baker again. That meant the film had to contain a young girl, so far so good. If it contained a young girl it may as well contain a young boy (that's my thinking anyway), so immediately the old cliché "boy likes girl" came to mind. I don't know why, I guess I was hungry at the time, but I decided the boy character would try and woo the girl with food, specifically sandwiches. As soon as I had that thought the title and pay-off of the film came to me. What's the ultimate sandwich? I'm sure it's different for everyone, but for me it's peanut butter. So what better way to gain a girl's affections than with a peanut butter sandwich? The way to most people's hearts is via their stomach after all, or a knife to the chest, slightly less romantic though.

I discovered Arne Cunningham through the Young Actors Theatre and rapidly cast him after a two minute audition (with me playing the girl...poor Arne). The thing I love about working with young actors is when they're really good everyone thinks it's because the director has magically coaxed amazing performances out of them. The truth is they're naturally good actors, I just point the camera at them. Shh! I didn't tell you that.
With pre-production sorted it came to the day of the shoot. Knowing I only had roughly five hours to film everything meant I needed to film nearby my flat. Luckily I discovered a great location two minutes away, a quiet playground with a bench. Fortunately it was a lovely day, unfortunately it was a bit too much of a lovely day. The sun was so bright even focusing with the viewfinder was difficult at times. As the background to the bench was already pretty dark I could either expose for the leaves and have the kids blindingly white or expose for the kids and have them sat in front of a black hole. Being the nice director that I am, I chose to expose the actors properly...just. I'm aware some of the shots are slightly over exposed, especially on Arne's shirt, but it was a trade-off with having everything else way too dark. I know he could've worn something else but I needed them in school uniform otherwise they'd have to change clothes constantly to portray the passage of time, and that's neither practical nor feasible in such a short space of time. I'm also lazy when it comes to continuity so having school uniform solved that.

After an hour of shooting in my kitchen the shoot was wrapped and it was onto the edit. I was so excited to get it cut together I edited the film in one day, the next day actually. Too often films take such a long time to make or never even get finished, that when the opportunity to have a really short turnaround arises I grab it by the proverbial balls. I recently took part in the Sci-Fi-London 48 Hour Film Challenge and really enjoyed the imposed time limit. I sometimes think that taking a long time can be just as negative as positive, it allows you to over-analyze every single detail. I like to work quickly and have intense bursts of creativity making decisions with gut instinct. Also now I have a finished film less than 36 hours after shooting it.

I'd like to quickly mention the music, the awesome track I used was by The Plastic Society. One of the band members is Martin Dubka who's composing the music for my next short film Plastic Love. I love nothing more than editing visuals to music whilst telling a story, and the track perfectly captured the playful mood and homemade sandwiches feel I wanted.

The finished film can be watched on the Virgin Media Shorts website but also below for your convenience.

Big thanks to all the cast and crew for helping make the film possible. You're all awesome! I'll make you a peanut butter sandwich one day.

Excelsior!
Posted by Jamie at 17:02 No comments:

The Last Book in The Library
Writer/Director/Editor
My entry into the Sci-Fi London 48 Hour Film Challenge.

Side by Side
Writer/Director/Editor
The story of two unlikely friends and the bond they share.

Vision
Writer/Director/Editor
A young woman receives a mysterious DVD in the post. She soon comes to realise even pressing play was a bad mistake.

Daddy Bunchee Ate My Baby
Writer/Director/Editor
A dark fairytale about a local legend of a creepy man who steals babies.

MY OTHER WEB STUFF